Return to the Lanark, Ontario, Canada page - or - return to A McLaren Migration homepage.

To appreciate the layout of the McLaren farms we need to understand how the land was surveyed. It took a while to piece this together; please be patient and just keep scrolling down the page.

Each "township," in this case Lanark Township, was divided into concessions, parallel strips of land 1.25 miles wide, usually running north and south, but variable with topography. Each concession strip is then partitioned by lot lines, one quarter mile apart. That makes each lot a rectangle, 1.25 miles deep and .25 miles wide. Each concession strip and each strip of lots was numbered, and those numbers would identify a particular lot. Since the area inside each rectangle is 200 acres, and each settler received 100 acres, each would get one half of a lot. Peter, for example, received the East half of Lot 2, Concession 4; John received the West half of Lot 1, Concession 4. Here's the map for 1821.

By 1861 the children of Peter and John had inherited and/or acquired several farms in the immediate vicinity. Here is the map, with descriptions of the owners listed below:

Census and agricultural records for this period give us a closer look at the McLaren farms:

Google Earth gives us an opportunity to see these farms outlined over current geography. The Concession lines became farm roads, and those roads still exist in Lanark. Here is a picture (with grateful thanks to Google) of Lanark today. 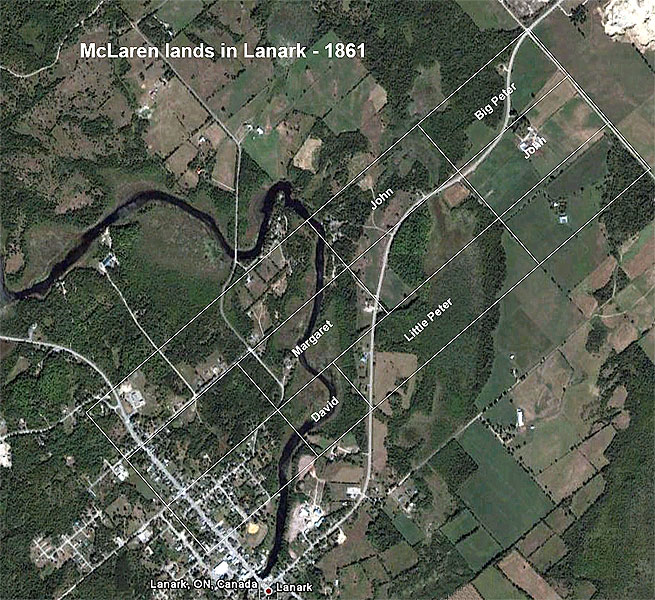 Return to the Lanark, Ontario, Canada page - or - return to A McLaren Migration homepage.

This site, A McLaren Migration, is maintained by David J. McLaren.
Updated June 4, 2010
Copyright © 2021 David J. McLaren, all rights reserved.
Commercial use of the material on this site is prohibited.