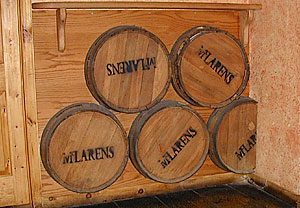 There are lots of McLarens in Canada; it was one of the surprises visiting Lanark. Street names, businesses; it wasn't that unusual to see our surname on display. And then there was the distillery.

I first encountered John A. McLaren, distiller, in the 1901 Canadian Census. We are not directly related, as far as I can tell - but all McLarens share a common ancestor somewhere. In any case, it was fascinating to find a 68 year old agnostic distiller living with a housekeeper in Perth, just south of Lanark. Declaring himself an agnostic was far more unusual than his profession - it was the first such declaration I had seen. 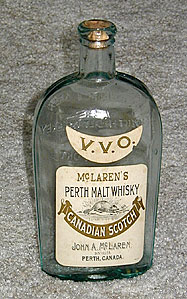 John's father, Robert, was one of the first settlers in the Perth area, arriving about 1816. He founded the McLaren Distillery in 1831 and sent John back to Scotland to learn the secrets of producing Scotch whiskey. Their contribution to the colony was not without detractors. Many of the Scots who spent their working lives in the factories of Glasgow, spent their time off in the taverns of Glasgow. Their leisure pastime followed them across the Atlantic. There were four taverns in the town of Lanark in its very early days and a great hue and cry over the "godlessness which prevailed particularly among the younger people."

Our Lanark cousin Grant, David James' brother, showed us this antique pint bottle from the McLaren Distillery. Then we walked into a bar in Perth (just for the atmosphere, mind you) to find a wall decorated with casks from the old distillery.

This site, A McLaren Migration, is maintained by David J. McLaren.
Updated March 28, 2021
Copyright © 2021 David J. McLaren, all rights reserved.
Commercial use of the material on this site is prohibited.